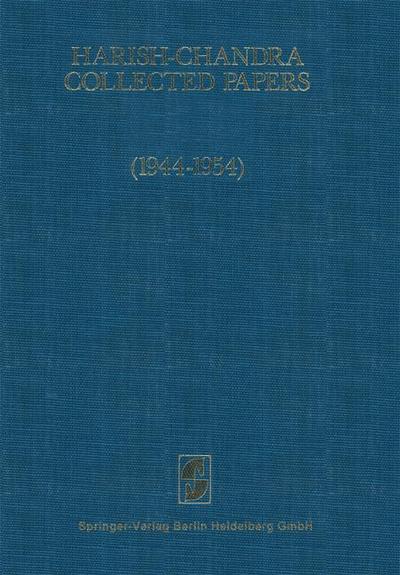 From the Preface by V. S. VARADARAJAN: These volumes of the Collected Papers of Harish-Chandra are being brought out in response to a widespread feeling in the mathematical community that they would immensely benefit scholars and research workers, especially those in analysis, representation theory, arithmetic, mathematical physics, and other related areas. lt is hoped that in addition to making his contributions more accessible by collecting them in one place, these volumes would help focus renewed attention on his ideas and methods as well as lend additional perspective to them.
The papers are arranged chronologically, Volume I collects his articles written between 1944 and 1954.
Springer Book Archives
On the theory of point-particles (with Bhabha, H. J.).- On the removal of the infinite self-energies of point-particles.- On the scattering of scalar mesons.- Algebra of the Dirac-matrices.- On the fields and equations of motion of point particles (with Bhabha, H. 1.).- On the equations of motion of point particles.- A note on the a-symbols.- The correspondence between the particle and the wave aspects of the meson and the photon.- On the algebra of the meson matrices.- On relativistic wave equations.- Equations for particles of higher spin.