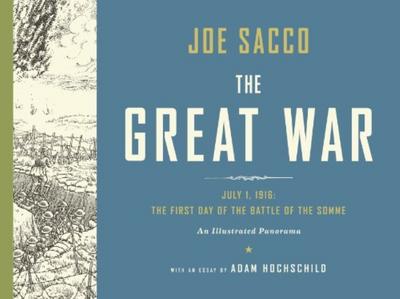 AN ILLUSTRATED PANORAMA WITH AN ESSAY BY ADAM HOCHSCHILD

The first day of the Battle of the Somme has come to epitomise the Great War. This monumental panorama captures the unimaginable horrors of that fateful day.

On 1st July 1916, almost 20,000 British soldiers were killed and another 40,000 were wounded during the first day of The Somme. In The Great War, acclaimed cartoonist Joe Sacco depicts the events of that day in an extraordinary, 24-foot-long wordless panorama: from British soldiers going 'over the top' and being cut down in No-Man's-Land, to the tens of thousands of wounded soldiers retreating and the dead being buried en masse.

Printed on fine accordion-fold paper and packaged in a deluxe hardcover slipcase with a 16-page accompanying booklet, The Great War makes visceral one of the bloodiest days in history.

'This is incredible. It is fantastic. He's showing you far more than a film or photographs could. It's just drawing ? it's a superb example of what art can do.' David Hockney, Sunday Times

Launched on July 1, 1916, the Battle of the Somme has come to epitomize the madness of the First World War. Almost 20,000 British soldiers were killed and another 40,000 were wounded that first day, and there were more than one million casualties by the time the offensive halted a few months later. This title depicts the events of that day.
From 'the heir to R. Crumb and Art Spiegelman' (The Economist) comes a monumental, wordless panorama capturing the horror of World War I.